The wall is gone

“The wall is gone” – that’s what they say in Goodbye Lenin, one of the most popular movies about the Berlin Wall and its fall.
On November 9th, 1989 the symbol of Soviet Power and Cold War fell, and since that moment the whole world has changed a lot. The Berlin Wall represented the world before Europe, whereas Europe means unity, freedom and mobility. In facts, less than three years later, in 1992, the Maastricht Treaty was signed and in that moment European Union started to become what it represents nowadays.

Were people aware, back in the Autumn of 1989, of the huge meaning of that event? Could they imagine the historical relevance of such a real, material happening like the distruction of a wall? Sure we know that it was probably the greatest party ever, that the feeling of excitement was filling the air and everybody could perceive that. But what was the crowd really thinking of in that moment?

We’ve all probably heard of the famous speeches had by politicians or other authorities, who claimed the historical importance of the fall of Berlin Wall and spoke about its political consequences. But even they couldn’t ignore the fact that people in the streets were celebrating like never before, making the city a huge and uncontrollable party. Margaret Thatcher defined November 9th “a great day for freedom”, Horst Köhler, former German President, said that «the Wall was an edifice of fear. On the November 9th… it was a place of joy» and even Angela Merkel, who was a young girl at that time, probably joined the celebrations, after making it through the Bornholmer crossing and phoning her aunt in Hamburg from the west side of the Wall*.

Nonstop celebrations, music, joy and laughs – that’s what best represents the fall of Berlin Wall among the young people in Berlin. They were finally able to be free, to live their city and to see their families finally brought back together. But they probably couldn’t imagine what that was going to mean for Europe. Most of them were associating the end of the Wall era to the end of Communism and the start of Capitalism, the two opposite worlds that the Wall was keeping apart. But it was still impossibile to realise that that moment was also the beginning of a new way of living Europe and especially the borders. The Wall of Berlin was just another example of how men can build and destroy borders themselves; from that moment, many borders were destroyed in Europe, opening new possibilities and giving millions of people the possibility of feeling European.

Today, one day after the 26th anniversary of the fall of Berlin Wall, many people might wonder whether the world has learnt the lesson. Many walls were destroyed, but many have been built since then. How could people forget the joy given by that moment of conquered freedom? How could people forget about the sadness and the pain caused by the absence of liberty? That might sound rhetorical, but in these days, remembering November 9th, more than other days, we should really understand that the freedom and possibilities that Europe has given us in the last two decades is not something to be given for granted. 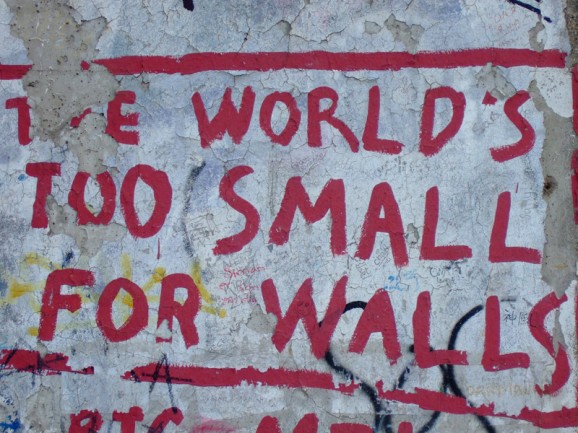 *Here‘s an interesting article by The Telegraph for those who want to discover some underrated stories of people in Berlin in those days.