The World Is Floating (Piers)

Everybody is talking about Christo and Jeanne-Claude‘s The Floating Piers. The otherwise tranquil island of Monte Isola, situated in Lake Iseo in northern Italy, has been transformed into a tourist hot-spot for 16 days this summer, thanks to a pop-up art installation made of floating saffron-colored walkways.

The free installation opened on June 18, but its popularity has gone way over the expectations. Apart from the incredible quantity of visitors, Italian and international press just can’t enough of it and everyday you can read dozens of new articles on the subject. Pequod proposes here an international press review on the topic, highlighting the most interesting rumours about this land-art masterpiece. 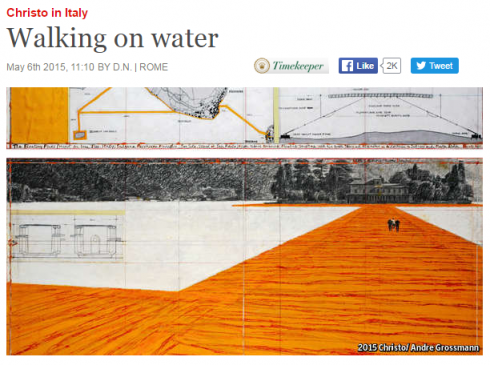 Last May the Economist dedicated an interesting post to The Floating Piers and to the artist’s previous works. Usually, people’s reaction to Christo’s artworks varies a lot from one person to another. Here’s the fun episode reported in the article: 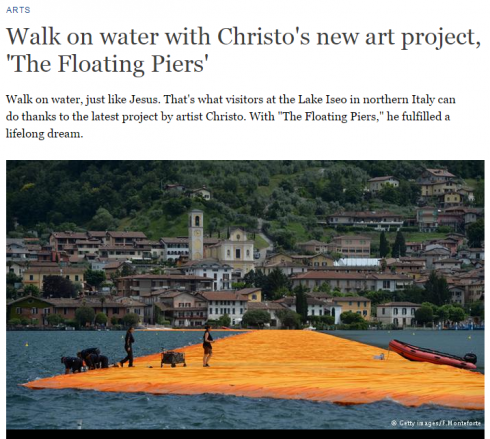 German DW gives its readers detailed technical information about the installation. Perhaps it’s because a German company was on task – and the company managed to finish on time, of course:

A German company based in Lübeck, called Geo – Die Luftwerker, was commissioned to prepare the fabric – to trim it, sew it and lay it on the piers. Having worked nearly the whole year on the project, the company’s director, Robert Meyknecht, is satisfied with the results – and the fact that they managed to be ready on time: “Towards the end we had to work in shifts from 7 a.m. until 11 p.m.,” he says.

Also, the article wants to reassure German visitors that are willing to visit Iseo Lake and the installation with a useful detail, especially if they want to experience Italian food along with Christo’s art:

Meanwhile, the municipality decided to spruce up the city before the event, and installed new benches that were slightly larger than the older ones. 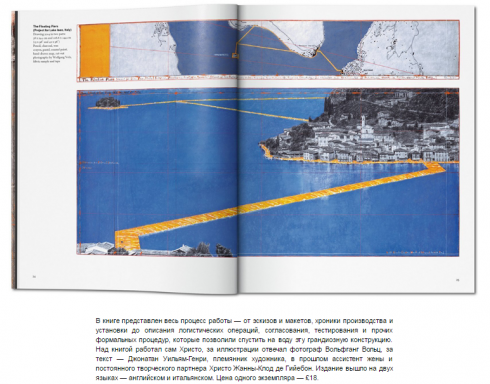 Even Vogue Russia shows a particular interest in the project itself, as it dedicates an entire article to brand new Taschen book on The Floating Piers. 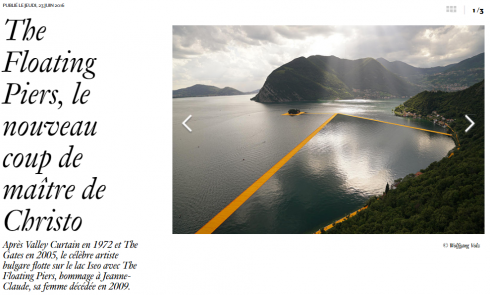 Less technical-oriented but still accurate is AD France contribution, which describes the feeling of walking on water like that of being cradled like a baby. 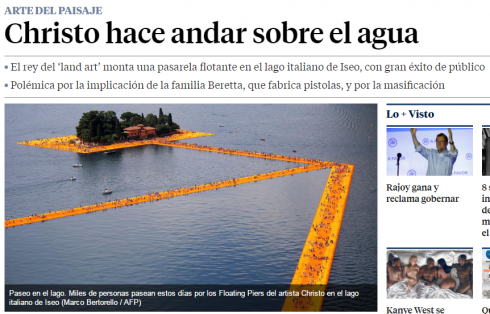 La Vanguardia writes about the success of the installation, described as a union of art, engineering and fiesta popular. But the Spanish journal doesn’t avoid a bit of polemic, concerning the involvement of Beretta family (the famous producers of guns) as they own the small island of San Paolo (in the picture). 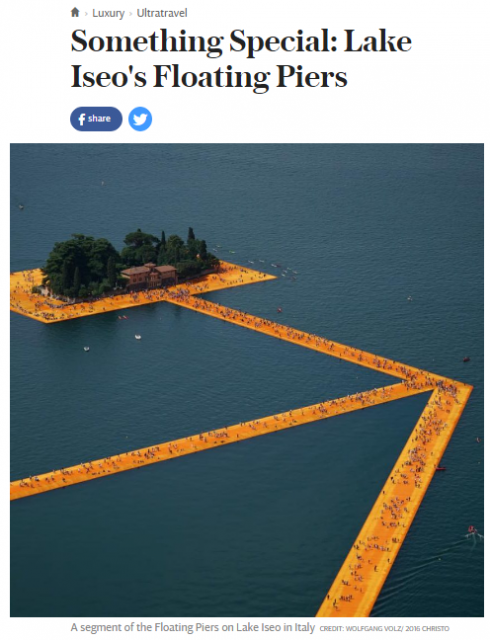 The Telegraph wouldn’t care less about polemics. In this article the author suggests to visit Monte Isola:

Also worth exploring during a visit to The Floating Piers is Monte Isola, the largest island to be found in any Italian lake and a tranquil home to about 2,000 people. Even now the only cars allowed there are those belonging to the priest, doctor and mayor. 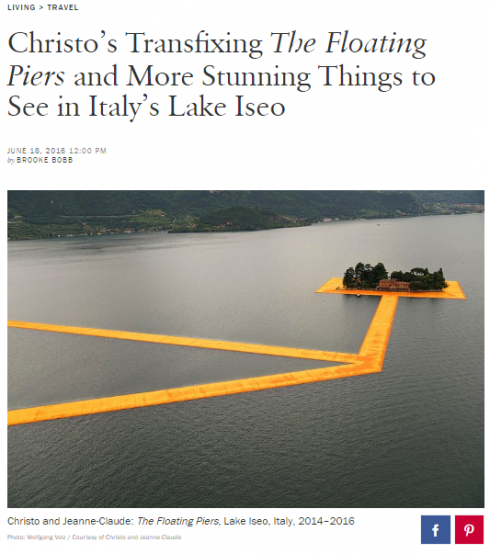 Other suggestions about what to see once you are in the area are given by Vogue.com, that informs the reader that next to Iseo Lake it’s all about sparkling white wine and bollicine. Here’s their idea of a perfect after-The-Floating-Piers experience:

This gorgeous vineyard has been open in Franciacorta near the lake since 1987, and is open for guests to tour and taste its wine. The winery boasts over 240 acres of land and specializes in sparkling varieties. After you’ve walked the The Floating Piers, Contadi Castaldi provides the perfect setting for a glass or two of vino. 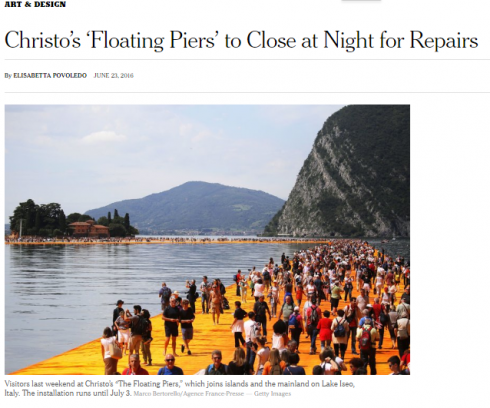 Well, the hype around The Floating Piers has worked so well that during the first few days since the opening the visitors have been more than expected. For this reason they decided to close the walkways at night. The New York Times gave the announcement, but also underlines that so far there hasn’t been any particular problem for the people who came to walk on water:

Despite the crowds, Mr. Valenti (the mayor of Sulzano, editor) said that the only health or safety issue involved a pregnant woman whose water broke while walking on the nearly two-mile-long walkway that connects two islands in the lake to each other and to the mainland. She was whisked by water ambulance to a hospital where she gave birth, he said. 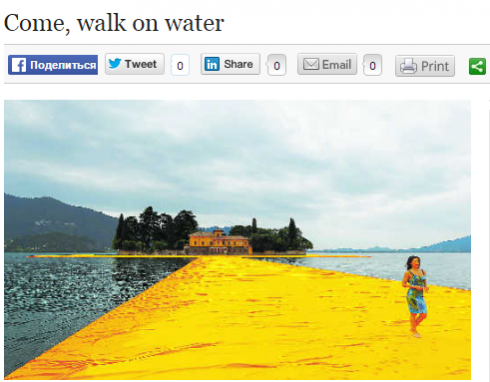 There’s no reason to hesitate any longer – The Floating Piers is worth a visit. Indian Tribune‘s title is simple as that: Come, walk on water. 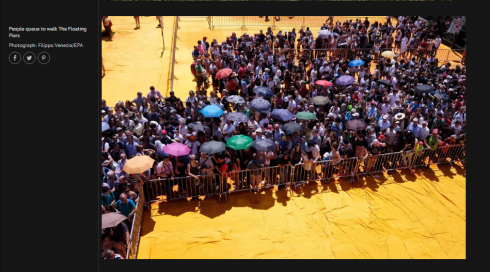 And if you’re afraid of the crowds and you think it’s a waste of time, don’t be. Look at this picture shared by The Guardian: don’t you think that even queues can be fascinating sometimes?