The role of the filmmakers against YouTube liquid temporality

YouTube has been one of the first websites to allow worldwide users to upload and share videos. These videos are mostly amateur moving images, videoclips, but also short films by independent filmmakers.
A revolution on a global level, with a mass of contents uploaded minute after minute from all over the world. A world where everyone can handle a camera and has the means to spread his own voice and imagination.

However there remains a noteworthy risk, a risk often associated with an escalation of extreme exhibitionism, with no limits, rules or crafts. But, in the melting pot of video democratisation, there are also those who were able to find inspiration in order to create a real narrative. These are narratives with logic and coherence: basing themselves on – or actively searching for – the support of the individual, the strength arisen from the grassroots, they manage to investigate reality, exploring cultural differences or bringing out unexpected similarities. A result – an analysis, a state of play – that returns to the users themselves, as they provided rough material, and to the web itself.

Images from the mass that, once studied, selected, and reprocessed according to precise storylines, are eventually accessible, often under a Creative Commons License or on the website itself.
Video snapshots, the briefest flashes stolen from the mundane and contemporary living become an indelible testimony, fixed into the cinematic art after freeing themselves from the liquid temporality of YouTube.

LIFE IN A DAY

In 2010 Ridley Scott, as executive producer, entrusted to Kevin Macdonald a project which will be considered as the first social, crowd-sourced feature film in history. From thousands of videos expressly uploaded on Youtube on July 24th Macdonald and his editor Joe Walker reassembled the pieces of everyday lives that eventually become history, not just a portrait of individual experiences but a testimony of an era.
In comparison, it is interesting to recall that the first Lumière films, with the exception of L’arroseur arrosé, were made to immortalize – for the first time with moving images – simple actions of everyday lives. 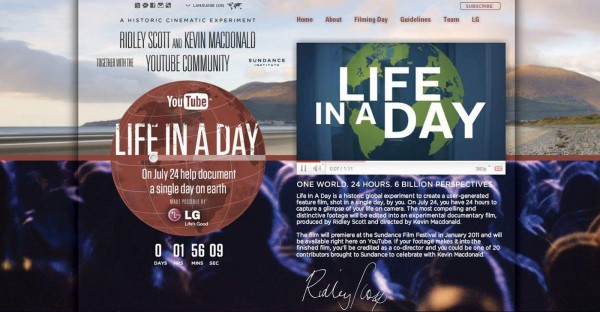 Althought not directly connected with the Youtube website, the production of Everyday Rebellion by brothers Arman and Arash Riahi was inspired by the many online videos that documented the Iranian green movement protests in 2009.
The strength of those images, images that were born in the streets and spread worldwide via the web, has been the driving force for the creation of a borderless documentary – a documentary that wants to explore the reasons and methods of peaceful protests and civil disobedience all around the world.
Even though most of the material has been directed by the two filmmakers, Everyday Rebellion also utilizes the visual contributions of anonymous activists or amateurs to become a semi-collaborative film, an analysis of contemporary history as it unfolds, narrated by those who are motivated to be part of it and change the course of historical events. 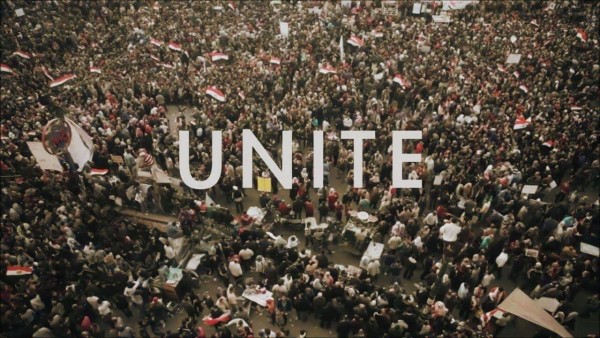 The use of images from the web is even more radical in The Uprising by Peter Snowdon, a documentary depicted as “a multi-camera, first-person account of that fragile, irreplaceable moment when life ceases to be a prison, and everything becomes possible again”.
After spending days as a distant spectator of the Egytpian revolution via social networks, and after two years of studies of that material, the English documentary filmmaker decided to use those fragments to create a film entirely composed of videos filmed by citizens living in Tunisia, Egypt, Bahrain, Libya, Syria and Yemen. These were mostly anonymous contributors that risked their own lives to reveal what is usually prohibited to be filmed, seen or shared.
Far from being a simple collector of snapshots, Snowdon recreates a pan-arabic revolution, a liberatory cry that transports the audience between opposite ends of the arabic world: an audience uncapable of holding on to well-defined space-time coordinates but still carried away with faith in the protest, in a freed grassroots movement. 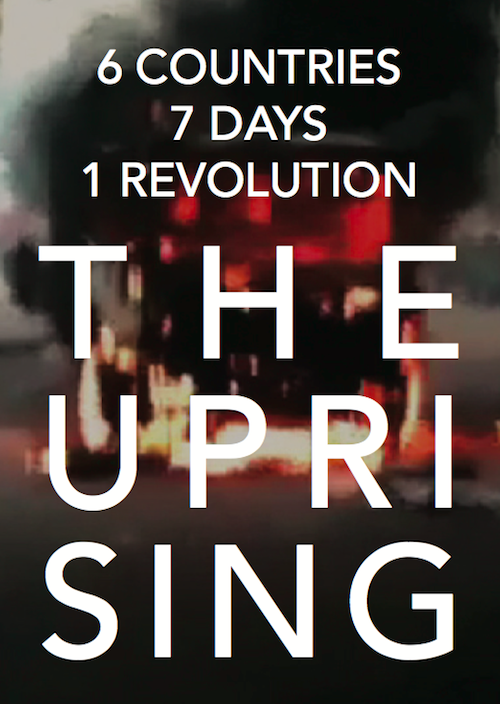 Unlike Life in a Day, the above-noted documentaries use videos coming from the web which were not filmed for a specific project. All these films immortalize contemporary traditions, but here history becomes a protagonist, the moment itself becomes history and the individual disappears to become the voice of a movement, the voice of a change and the echo of his own time.

Images and videos have always documented and served as a proof for the contemporary. Fragments of reality, often almost accidentally shot, eventually became the lasting icon of an era.
How much of what is currently on YouTube will be able to last? Maybe, Snowdon and the Riahi brothers – among others – helped to crystallize those images, by giving them a tangible form.
Or maybe, these stories and images will be overtaken by new icons of a contemporary era which is still yet to come.