Hop off the bus, take pictures, hop back on the bus, sleep in a hotel – repeat. That’s how millions of Chinese tourists spend their holidays every year. We’re all aware of the (quite accurate, in fact) stereotype of Chinese groups getting off a bus, cameras in their hands as they visit famous tourist destinations across Europe ready to shoot. However, this cliché may be about to end.

I discussed the current situation and future tendencies of the Chinese tourism market with Chao Nan Zhang, Operations Manager for the Chinese area at Ignas Tour Spa, a tour operator based in the Italian Trentino Alto-Adige region that specialises in incoming fluxes of travel to Europe. 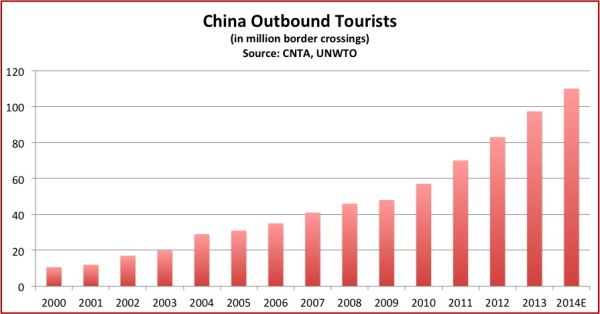 Chao Nan explains that, although big group tours of 30/40 people are still the Chinese favourite way of travelling around Europe, mass tourism is in decline. “About ten years ago, when outbound tourism started flourishing in China, average Chinese people still had little to no knowledge of the English language and European culture, so mass group tours were basically their only option. Nowadays, tourists from the Middle Kingdom, who are often at their second European travelling experience, are not satisfied with the standard Central Europe mass group tour and they often opt for more customised solutions.” Asked about these new trends, Chao Nan says that single group travels are more and more popular among Chinese tourists. “Single group are smaller groups of travellers that usually request upper-level customised tours catering to their specific needs. For example, we once arranged a football-themed tour in Spain for a group of Chinese football fans. They visited all the major stadiums and even attended Barcelona’s team practice, where they could meet their idol Lionel Messi – and take a picture with him of course.”

Talking of the most popular European destinations, France, Italy and Switzerland still attract a large share of Chinese tourists, even if in 2016 they suffered a steep decline in visitors, partly due to the introduction of new visa requirements for the Schengen area at the end of 2015. Conversely, this year Chao Nan saw a boom of requests for tours to the UK, which is not part of the Schengen agreement, probably thanks to the extension of standard visitor visas and to a simplified application process. Moreover, as Chinese people become more knowledgeable about European countries and the cultural differences among them, more and more tourists are attracted to less renowned areas, such as Eastern Europe or the Balkans.

Chao Nan has no doubts concerning the future of the market: “Even if group tours still account for the majority of incoming Chinese tourism revenues, the future tendency is clear: in the coming years, the segment of FIT (free independent travelling) will become more and more important for the incoming tourism industry.”

Chao Nan’s opinion is supported by recent data. The trend for independent travel is sharply on the rise, especially among the younger Chinese, who are open-minded, well educated and more adventurous than their elders. They are also hugely dependent on online search and are used to booking hotels, flights and attraction tickets via online travel sites.

So, what does this mean for the market? Are tour operators and tourist agencies doomed? Not necessarily. “Mass group tours are low-cost solutions, where price plays a big role and competition is fierce. As a result, margins in this segment are wafer-thin. Catering to FIT can be more profitable, although it entails much more effort”. Agencies and tour operators should therefore focus on providing customers with unique experiences that cannot so easily be booked online.

“We at Ignas Tour are already working on this by offering special packages of a single day or even of just a few hours that cater specifically to FIT. For example, young internet-savvy Chinese tourists may book a hotel room in Venice online, but they would like someone to guide them through the narrow and maze-like Venetian calli and to show them the best attractions the city has to offer. That’s why we propose short Chinese guide tours in Venice and in other main tourist destinations in Europe. Besides cities guided tours, we also arrange visits to Italian wineries, where tourists can learn about wine production and have a wine-tasting experience, or to pizzerie in Naples, where they can even make (and eat!) their own pizza under the supervision of pizza chefs.”

Chinese tourists may be getting tired of the jam-packed mass group tour experience and look for more unique and personal experiences, but there is one thing that won’t change: “They’ll never stop taking billions of pictures to show to their friends and families at home” says Chao Nan with a little laugh. After all, old habits die hard.