Easy is not always fun. Sometimes warm weather, nice nature and readily available facilities can feel too ordinary to give us the thrill we need to feel alive. That’s probably why extreme and wild places have recently acquired a whole new charm in the eyes of travellers. We’re not talking gap years in South Asia, nor working in Australian farms for a few months; hitchhiking in the Alps would hardly qualify, and we can all agree that weekend camping is far from extreme. What we mean by “extreme places” is truly unwelcoming territories: cities located in hard-to-reach regions or in areas where day to day life is an actual challenge. Enjoy Pequod’s unpleasant journey through the most extreme cities on Earth.

It comes as no surprise that the northernmost cities in the world are located in countries such as Norway, Greenland, Canada, Russia and Alaska. At 817 kilometres from the North Pole, the Canadian locality of Alert is the farthest north permanently inhabited place in the world. The town has no permanent dwellers but it’s a destination frequented by researchers and scientific personnel all-year-round. Like other places located north of the Arctic Circle, Alert offers in fact a unique opportunity to study climatic and meteorological phenomena.

Ranked the 10th northernmost city in the world, Dikson is the Russian port situated farthest north. Unlike Alert, the locality has a permanent population which was estimated at 676 inhabitants by the 2010 census. Pupils in Dikson attend the northernmost school in the world and the town has even a hotel. Forget about tourism though, as Dikson is one of the Russian forty-four closed cities (named ZATO in Russian) where access requires specific authorization and is generally forbidden.

Speaking of extreme cities, two other Russian cities must be mentioned: besides being situated extremely north, Norilsk and Nikel hold another extreme record as the most polluted places in the country. The reason for this infelicitous record is their massive industrial activity, almost entirely revolving around nickel smelting. The city of Nikel produces almost 10% of nickel globally and even its name testifies to this activity.

From one pole to the other: to find the southernmost cities in the world we need to go to Southern America, namely Argentina and Chile. Two cities claim to be the world’s city farthest south: Ushuaia in Argentina and Puerto Williams in Chile.

Puerto Williams is officially recognised as the southernmost city on Earth and is located on Navarino island, facing the Beagle Channel. Due to its strategic position, the city is an important centre for scientific research linked to Antarctica.

Ushuaia is located on the shores of the Beagle Channel too, all the way down in Tierra del Fuego, Patagonia. The unique combination of sea, mountains, glaciers, lakes and forests makes the end of the world a beautiful place. But before you get too comfortable remember that Antarctica, the coldest place on earth, is just a few days away by boat.

A place can be considered extreme for the difficulties it takes to reach it, regardless of its latitude. Lack of streets and transport connections along with their significant distance from other inhabited areas have made the following places the most remote in the world.

17,000 feet above sea level, lost in the Peruvian Andes, La Rinconada is the highest city in the world. Reaching this mining shantytown takes days and significant effort, considering the risk of altitude sickness and the treacherous roads that can only be travelled by truck.

Speaking of remoteness, what comes to mind more readily are islands. In fact, what is considered the most remote inhabited place in the world is an archipelago, Tristan de Cunha, located 2,400 kilometres away from South Africa, which is the closest land to the islands. Discovered in 1506 by a Portuguese explorer, today Tristan is part of the British overseas territory of Saint Helena, Ascension and Tristan de Cunha and its capital is Edinburgh of the Seven Seas. Its population amounts to 267 people, but travel connections are made difficult by the absence of an air strip, courtesy of the islands’ rocky geography. As a consequence, the place can only be reached by occasional cargo vessels or deep sea fishing boats from South Africa. It shouldn’t come as a surprise then that one of the islands of the archipelago is named Inaccessible Island… 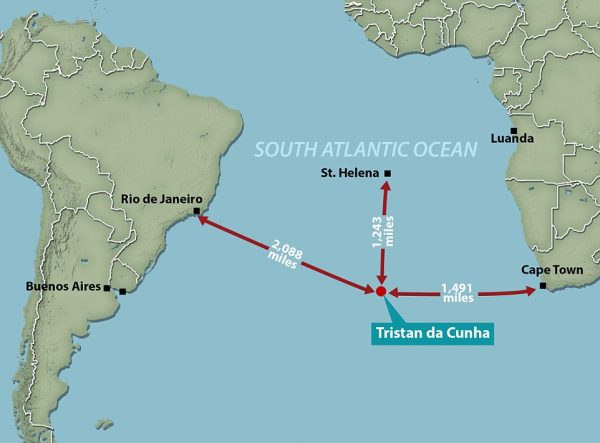